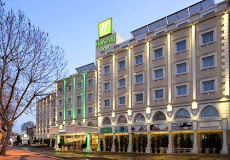 Here are some useful links for public transportation in Istanbul.

Click here for general information on public transportation in Istanbul

The participants may choose a Hotel of their own choice and budget from popular booking sites, such as:

Istanbul, historically known as Constantinople and Byzantium, is the most populous city in Turkey and the country's economic, cultural, and historic center.

Without a shadow of a doubt, Istanbul – like London, New York or Paris – is one of the world's great cities. The only city in the world that is in both Asia and Europe, Istanbul also straddles the ancient and modern worlds. Superbly situated either side of the blue ribbon of the Bosphorus Strait separating Europe from Asia it is, unlike any other city in the world, split between two continents.

Through most of its 2,500-year-long history, Istanbul was a cultural melting pot. Today, the city is largely Turkish, but feels extremely cosmopolitan – perhaps due to the reach of the Ottoman Empire, which at its height stretched from the Balkans to Egypt.

UNESCO has declared much of the old city area as UNESCO World Heritage sites and the mind-boggling myriad of monuments here are well worthy of the title. The Aya Sofya is the greatest of all Byzantine churches while mammoth Ottoman mosques and palaces, and the remains of Byzantine walls and cisterns are all major reminders of Istanbul's past role as the crown jewel of empire-builders.

Places to Visit in Istanbul

Basilica Cistern: Built by Justinian I in the 6th century, this cistern, the largest in Istanbul was built to supply water to old Constantinople. The sunken palace as it is also known is held up by 336 marble columns. The cistern was later put to use to provide water to Topkapi Palace and its surrounding gardens.

Blue Mosque: Known in Turkey as Sultanahmet Cami, the Blue Mosque is named so due to its stunning array of blue tiles that decorate its interior. The Blue Mosque is certainly the most famous mosque throughout the world and was built to rival the Hagia Sofia between 1609-1616.

Bosphorus: The famous straight that forms the boundary between Asia and Europe and links the Black Sea with the Sea of Marmara, makes it one of the most important straights in the world. The Bosphorus is the narrowest straight that is navigated for trade routes and it approximately 31km long. As Istanbul is situated on both sides of the straight it makes the city one of the most sought-after cities by Empires have gone by.

Chora Church: Is one of the world’s most impressive Byzantine structures. The name Chora refers to the church's location outside of the old city walls. The church was in operation until after the invasion of the Ottoman Empire and was converted to a mosque in 1453. In the year 1958, the building was made into a museum (Kariye Müzesi) and the magnificent mosaics and frescoes were once again uncovered and are on display to the public.

Grand Bazaar: First opened in 1461, Grand Bazaar or Kapalıçarşı as it is known in Turkish is one of the world’s largest souks. The covered market has 61 streets accessed via 4 main gates, over 3000 stores, 5 mosques and 6 fountains. After being destroyed and repaired numerous times the Grand Bazaar is one of Istanbul's most popular tourist attractions. Here you can find the streets filled with souvenirs, Turkish carpets, ceramics, leathers, and gold to name a few.

Hagia Sofia (Aya Sofya): Thought to have changed the history of architecture due to its dome roof, the Hagia Sofia was built in 537 and was the world’s largest cathedral for almost a thousand years. The cathedral was turned into a mosque under orders from the Ottoman Empire but was turned into a museum in 1935. The museum houses amazing mosaics, impressive marble pillars, and the famous domed roof.

Hippodrome: Famous from the time of Constantinople under Roman rule the Hippodrome actually dates back AD 203 during the Byzantine Era. The area was a large circus in the old city and was the center for many sporting events such as chariot racing. What remains of the Hippodrome are three large columns, The Serpent Column, the Obelisk of Theodosius and The Walled Obelisk.

- Airport Shuttle (public): The airport shuttle departs every 30 minutes. It takes 45 minutes to get to the Nippon Hotel. (It might take longer during peak hours.)